Why Your HIIT Program Isn’t Working 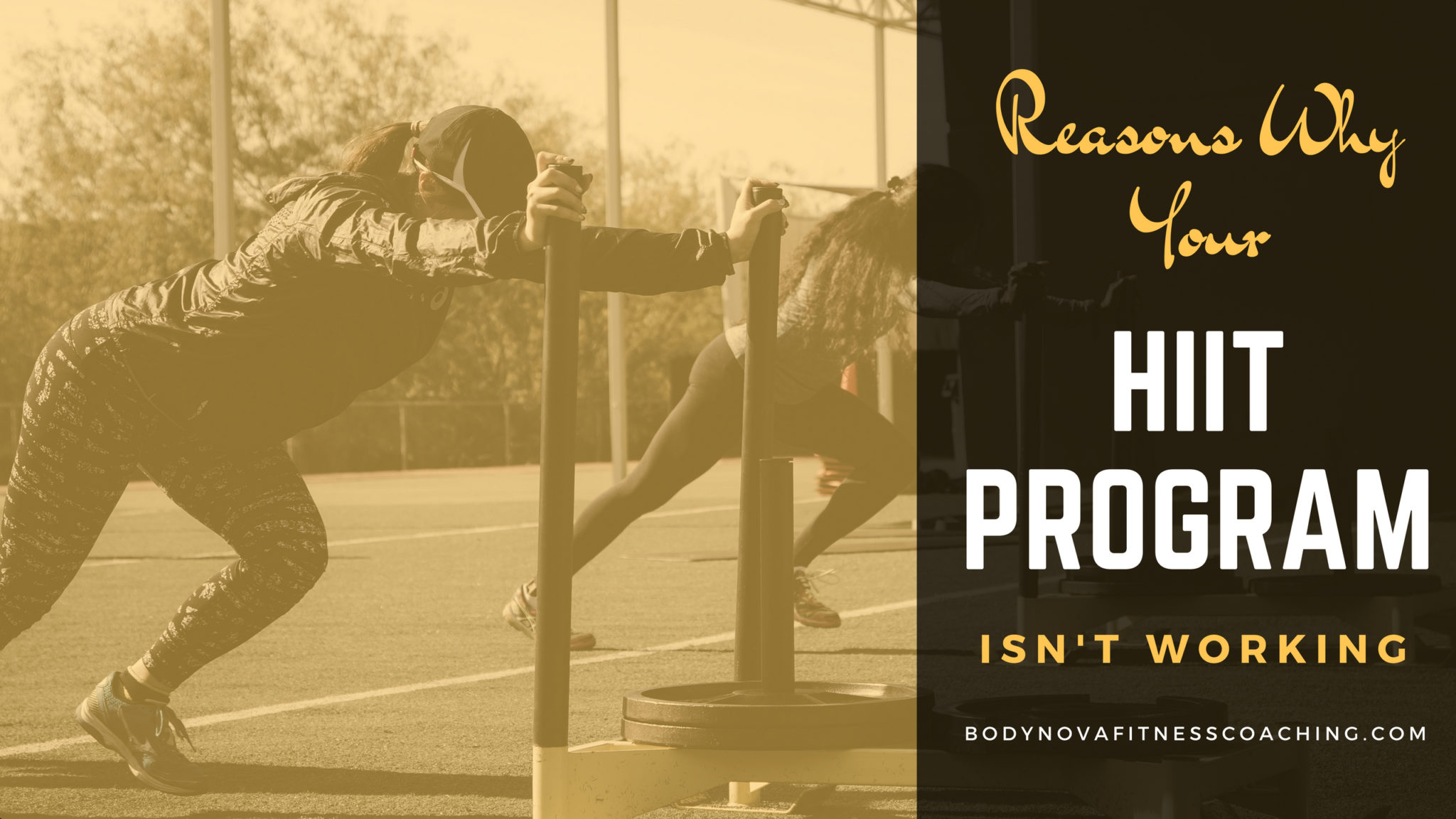 Excuse the language, but let me explain. Without me delving deep into the physiology (I can if you need me to), you have to work hard enough to cross a certain threshold to receive the benefits associated from HIIT workouts. Usually, after a certain amount of time (which can be in as little as 20 seconds, and can take as long as 70 seconds) you’ll start to feel the burn in the muscles being used to perform whatever activity you’re doing. The catch is, YOU HAVE TO BE WORKING HARD! Some people believe that performing HIIT workouts will give them the same results just because they’re doing the same thing see other people are doing that are getting fantastic results… minus the hard work. If you’re not working hard enough, you won’t receive the extra benefits of:

1. Increased metabolism up to 48 hours after your workout. The harder you work, the longer that you burn extra calories once your workout is done.

2. Fat loss hormones. Growth hormone helps you burn additional fat during your workout. The cortisol released during your workout (which is one of the few times that this is good), makes you release more fat to be burned as energy. You also maintain more muscle as you lose weight, due to the higher intensity than regular aerobic exercise when you’re losing weight. In one of my favorite studies that I’ve read on High Intensity Interval Training, they compared 1 hour of aerobics 5 times/week, to 20 minutes of HIIT, 3 times/week. The aerobic group burned over 28,000 calories, and the HIIT group burned more than 13,000 calories over the course of this study. Most people think of fat loss as being purely calories in vs. calories burned. With that in mind, which group do you think lost more weight? If you said the HIIT group, you’d be correct. The HIIT group lost twice as much fat. You want to know why they lost more weight. Those fat burning hormones I mentioned earlier. Studies show that when you work hard enough to feel the burn in your muscles (lactic acid burn), your body produces these fat-burning hormones that will help you lose additional weight. As the the burn you experience gets larger, so does the increase in lactic acid, and fat burning hormones.

3. Increases in both anaerobic, and aerobic endurance. HIIT properly performed, will improve both types of endurance. A lot of people try to improve their 10K and Half Marathon times by ONLY doing long slow aerobic work. HIIT teaches you to work at a higher intensity during your long runs, without lactic acid slowing you down. I’ve been able to use this strategy with a few runners to help runner’s improve their running times in their off-season without specifically training for their half marathons.

You’ve Been Doing The Same HIIT Program For Too Long

Even though High Intensity Interval Training can help you produce some great results when you’re trying to lose weight, or improve conditioning, but improving your fitness journey that requires require progression. Meaning that in order for you to keep making progress, you will have to keep challenging your body, in order to force it to make progress. So that means that even though you have a well-designed program, you will eventually adapt to it, and you will need to change things in a way that will challenge you, in order to continue to make progress. If you’re at the gym using the electronic, equipment, you don’t want to use the random feature. The random feature will not allow you to be sure that the High Intensity Interval Training workout will make you work harder than the ones you did before. So you can have a different program, but it can be a step backwards, instead of being a step forwards so that you can trick the body into giving you what it want. Remember if your exercise program is too easy, your body won’t have a reason to change, because it can easily handle the demands that your putting on it. Stepping backwards with your HIIT workouts (unless you’re injured, or you’ve taken a long break) would be similar lifting 225 lbs. for 10 reps, and then change your program so that you’re now performing 185 lbs. for only 10 reps, in the same manner. Your body won’t be tested like it needs to be in order for you to get results

Here’s a few ways to make sure you move forward with your HIIT Workouts instead of just spinning your wheels in the no progress zone:

Remember the video on workout density? Well that applies here. You can perform your HIIT workout with the same work /sprint or sprint time, but cut down the rest period. In the research, scientists like to have to have their subjects use a 1 to 3 or 4, work to rest ratio. That means if I had you sprint for 30 seconds, you would rest from 90 seconds to 2 minutes. Now that’s a good starting point, but what happens if you’ve been doing that awhile? Would making someone perform those same tough sprints while reducing the rest period change by 30 seconds things? How about using the same rest period with 45-second sprints?

You Base Performance On Distance Instead of Time.

A lot of the apps, and running programs going around are either by people with weak background in exercise science, or they’re based on athletes that much better  than the average runners that they’re marketed to. For example, I had clients that were given running programs by a coach that appeared to give the same HIIT program used to improve performance to everyone. Now neither one of these ladies were the type of runners that would set the track ablaze with their run times. In fact one of them ran about a 10-minute mile. The coach based their HIIT program around 400-meter sprints. Well at a 10-minute mile pace, it would take them 2 ½ minutes, or 150 seconds to run that 400m. So this person would be traveling at about 6 miles per hour. Notice that I said traveling, and not running, because this person isn’t running, they’re jogging. A walk becomes a jog/run at about 5 miles/hour. Even if you chopped 30-seconds of this time they’re not traveling fast enough to be considered a sprint, and even if they were sprinting, they couldn’t run at that intensity for very long, let alone 2+ minutes. Most sprinters struggle to do that for 50 seconds, and most people will start producing lactic acid somewhere around 20-30 seconds during a sprint. So this distance was too long for these ladies to be performing sprints, because they can’t cover the distance fast enough to work at a high enough intensity (or in this case, high enough speed). So I cut the distance down to 200m, and not only did their running times significantly improve, they got leaner, and lost weight. Put some personal in that personal training. You can’t treat all of your athletes like they’re Michael Jordan. You’ve gotta meet people where they’re at!!!

You Focus On Quantity and Not Quality

If you’re performing HIIT properly, you won’t need to invest as much time into your cardio workout as you would if you performed traditional aerobics. For that reason, people may want to focus on the quality of their workouts, instead of just working out for a certain period of time. For example, in a previously mentioned post that quoted a study done by Tremblay, Simoneau, and Bouchard, the researchers found that 20 minutes, 3 times per week of properly performed HIIT workouts had people lose twice as much weight as those that performed aerobic exercise for 1 hour, 5 times per week. But, the researchers also made sure that the participants worked hard enough to produce lactic acid, and make the magic happen. Knowing that you may need to eventually perform more to allow for continued progress, you need to also know that there’s a trade off. If you work hard, it’s usually difficult to do that for long periods of time. If you work long, you will usually want to reduce the intensity, in order to make sure that happens. So, if you aim to perform more intervals, or perform them over a longer duration, you should also make sure that you maintain the quality of each interval by performing at a high enough intensity. One of the ways to do this is by obtaining your resting heart rate (they have apps for this now), and using Karvonen Formula to individualize your target heart rate zone. But you can use it to make sure that your heart rate gets above a certain point when performing each sprint. You can also use it to see how long it takes you to recover. So if you want your heart rate to go above 80% of you max heart rate during the sprints, and rest until it drops below 60%, then you would based your intervals on that intensity, and rest period. And there you have it, your own high quality personalized HIIT cardio workout. As your fitness improves, your heart rate will return to normal, or drop below that 60% of target heart rate faster.